This past Saturday, I participated in my first Field Day, an annual amateur radio event that is held in the US and Canada on the 4th full weekend of June. It starts at 1800 hours UTC Saturday (11am PDT), and runs through 2059 hours UTC (1:59pm PDT) on Sunday.

Ever since I was introduced to amateur radio operator, I had heard and read many things about Field Day and was really looking forward to participating in it this year. Typically, my local radio club sets up all sorts of equipment in a field and operates the whole time. It’s a great chance for hams to socialize, and also serves as a way to share the hobby with the community and interact with agencies that are served by some of the groups within the amateur radio community.

Before I start talking about Field Day too much, let me paint a quick picture of the radio scene where I live - in Clark County, WA.

There are two main groups that I am personally a part of - the first being the Clark County Amateur Radio Club. The club was founded 90 years ago and is still going strong. It meets monthly and sponsors or hosts several events and activities throughout the year. A typical (pre-pandemic) monthly meeting has upwards of 75 attendees and a strong sense of community. Many members have been involved for a very long time, and several really put a lot of effort into making sure that every event that the club is involved in is top-notch. I could really write a lot more about the club, and perhaps some day I will.

The other group I am involved in is the Clark County ARES/RACES group. ARES is an acronym for “Amateur Radio Emergency Service”. The purpose of the group is to be ready to provide radio support during an emergency if and when a disaster should strike. There are many scenarios that could play out where more “modern” methods of communication may either become overwhelmed (too many users at once), or fail to work at all. The ARES/RACES group will be ready to fill that gap should the time come.

Back to Field Day.

Long story short, COVID-19 and the restrictions that it’s brought with it really put a damper on this year’s plans. Due to the social distancing requirements currently in effect, the set up this year was drastically scaled back and relocated from a public venue to a club member’s private property. They had several different stations set up to operate on different bands (frequencies) throughout the duration of the field day event. Club members signed up for a window of time they would operate one of the stations for, so there were still people on-site for the duration of the event. However, operators were asked to limit their presence at the site to a very short window (15 minutes) before and after their shift(s). As such, member interaction would be somewhat limited.

The frequencies on the club’s sign-up sheet were pretty much all HF (high frequency aka long-range) bands. My license gives me access to operate on most HF frequencies, but I have not had opportunity to do so yet and given the restrictions, decided that this year’s Field Day probably wasn’t the ideal time to be learning. So, I decided to go off on my own. 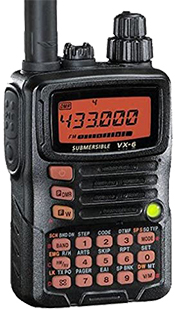 I own a little 5 watt handheld radio, a Yaesu VX-6R, as pictured above. It is a tri-band radio and operates on VHF/UHF frequencies, specifically the 2 meter band, the 1.25 meter band, and the 70 centimeter band. I haven’t mentioned it yet, but Field Day is also a contest of sorts. As an operator, you earn points for every contact you make. Since my handheld only outputs a max of 5 watts and was only being run off of battery power, I received a 5x point multiplier for every contact I made - eg. instead of earning 1 point, I would earn 5 points.

I’ve also got a roll-up J-Pole antenna made out of ladder line (flat cable with two wires running parallel - think old school TV antenna wire), that can be hung from something to improve the performance of the handheld significantly when compared to the small antenna that is on the radio.

The kind of gotcha here is that VHF/UHF frequencies typically have a pretty limited range. With radios, there is an inverse relation between a radio wave’s frequency and its wavelength - ie. the higher the frequency, the shorter the wavelength. Basically, the longer a wavelength is, the further it will carry your signal. My handheld also only puts out 5 watts, which limits the strength of the signal I am transmitting. Of course, other factors come into play, such as the antenna being used, obstructions between the transmitting station and the receiving station, etc. But, long story short, if I had operated from home with my handheld, I probably would not have gotten much action.

So, I decided to find a hill. 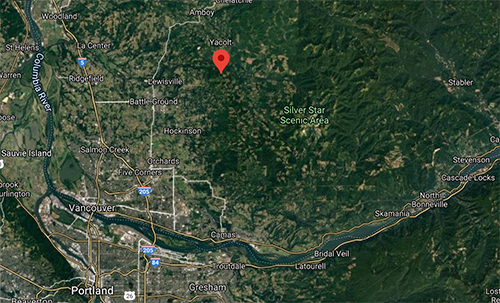 I opted for Bells Mountain, which is 5 miles or so northeast of Battle Ground, WA and has an elevation of roughly 2100 ft.

The mile and a half hike from the trailhead to the summit was mostly uphill on a logging road. The route was not clearly marked, but I managed to find my way. I lugged along a foldable chair, a few pieces of (unneeded) PVC to fashion a mast for my roll-up antenna, a water bottle, a thermos, some snacks, two backup handheld radios, a couple of extra batteries, and two laptops. Needless to say, my hands were full.

Once I made it to the top, I set up shop. 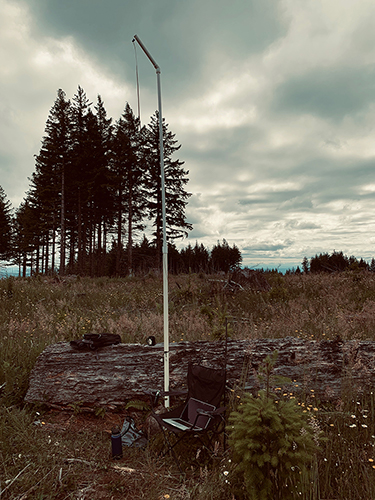 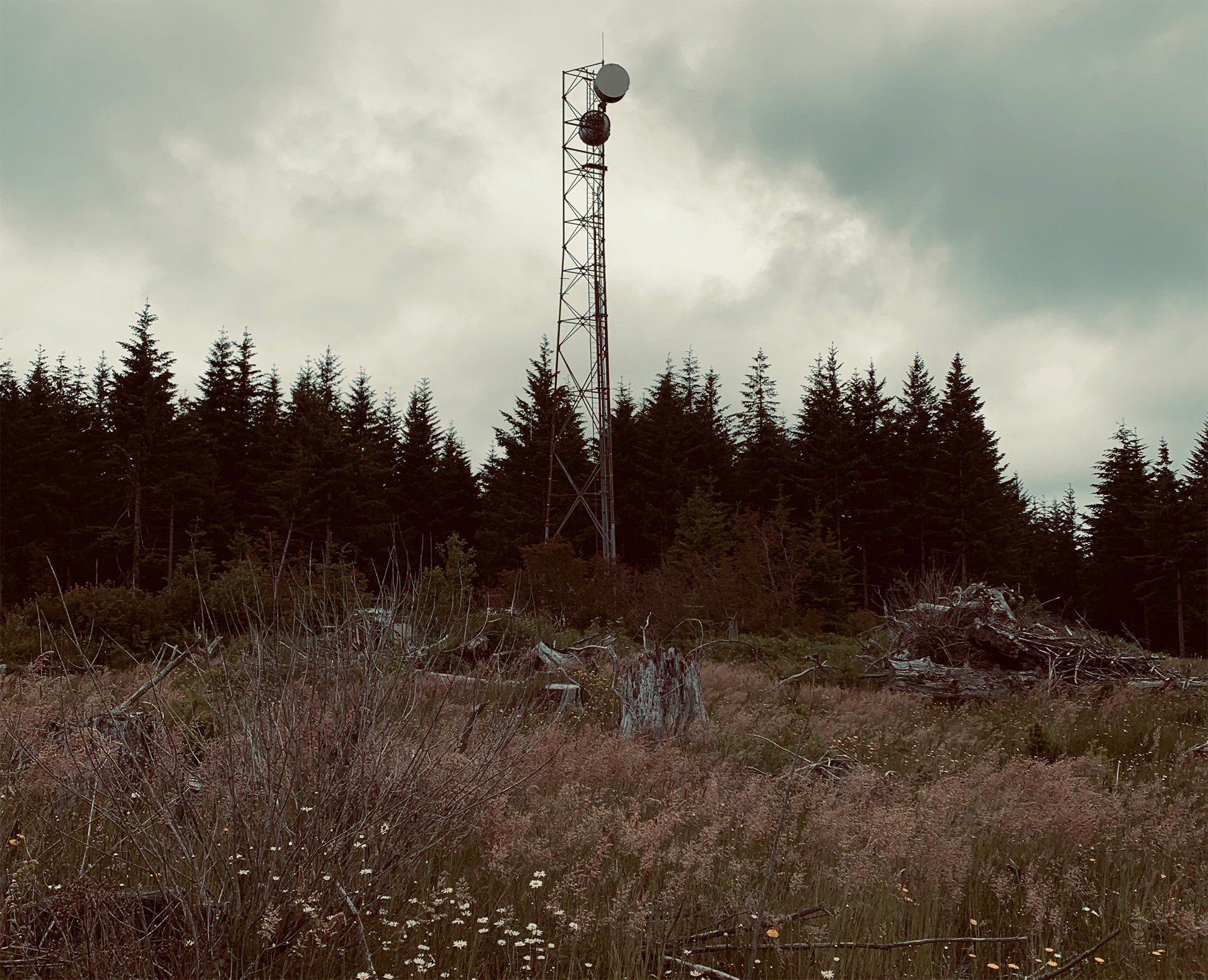 If I had scoped out the location ahead of time, I would have just planned to hang my antenna off of a tree. But, since I packed the PVC mast up there, I went ahead and used it. It seemed to work fine. As you can see in one of the above pictures, there is also a radio tower on top of the mountain. I set up about 100 yards away from it and did not notice any interference.

I operated from the top of the hill for roughly 4 hours. My first laptop’s battery went dead, so I switched to the second laptop (was using the laptop to log my contacts using a program called N1MM). It was my first time using a logging program and I found it quite useful. The program would let me know if I entered an invalid callsign, and whether I’d logged a contact with the person previously.

In the time I was up there, I logged 42 contacts on the 2M and 70cm bands. I called CQ a couple of times on the 1.25 meter band (220MHz), but did not get any response. While my radio supports all 3 bands, my external antenna only supports 2M and 70cm. So I am not sure if anyone was on the 220MHz frequency and just couldn’t hear me since I was using the radio’s antenna, or if there just wasn’t anyone there.

One challenge was that since I was only running 5 watts of power, if I doubled up (what we call it when two people are transmitting at the same time) with anyone running more power, I would lose out. Coupled with the fact that all of the field day traffic on each band seemed to only be on one frequency1, I had to squeeze into the gaps between the more powerful stations.

The highlights of my field day experience were the contacts I made with operators out in the Beaverton area, and down in the area east of Salem, Oregon. Both were also on top of hills or mountains, and the range we were able to communicate over with a 5 watt radio really impressed me. The longest of my contacts was about 70 miles away as the crow flies.

I had a lot of fun and am looking forward to next year’s event. It is kind of funny to hike up to the top of a mountain, sit by yourself all day, and have almost lost your voice by the time you hike back down.